4000 Jahre Entdeckungen und Erfindungen. This omnibus volume presents a unique, authentic and profound overview of the extensive history of Chinese science and technology over the past 4000 years. First time, it was published in 1978 by the Chinese Youth Publishing House in Chinese language. The book includes a Chinese history of astronomical observations, calendar calculations, mathematics, earthquake measurements, physics, chemistry, pharmacology, waterway engineering, metallurgy, shipbuilding and wagon building, breeding and cultivation methods, agriculture and many more topics. 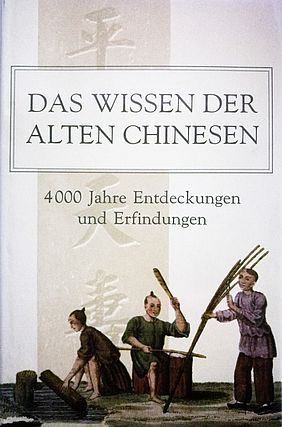 The present volume was translated to German by Käthe Zhao in collaboration with Hsi-lin Zhao.

Although there is the well-known gigantic multi-volume work of Joseph Needham in every technology or sinology library, only an inadequately small cross-section of his work has appeared in German language. Above all, the authors of this book are Chinese scientists which offers a German speaking audience the unique opportunity to receive deeper insights to a Chinese view upon China's scientific achievements. Any other German-language alternative to this book, on the same level of scientific research, will be difficult to find.

The Chinese culture is one of the oldest cultures in the world, which continue to live in the present. Their creative achievements in the fields of philosophy and literature, science and technology are undoubtedly one of the most important in human history. The fact that such important inventions as silk, paper, printing technology, porcelain, compass and gunpowder are due to Chinese inventors can be assumed to be generally known. We also have great achievements in the construction of pagodas, bridges, the Great Wall as well as medical services.

Lesser known, however, are many other, numerous scientific discoveries and achievements, which are an expression of a high bloom of Chinese culture and are described in detail in this recommendable work by several Chinese experts.