For almost 40 years now, China's economy is prospering. How is that possible? How many Cassandras have predicted its doomsday? But China just keeps on growing. Slower in motion now, maybe, but it's still steadily blossoming and opening up even further. Sinocademy explains the Chinese growth model in brief and with simple words, applying a Keynesian growth model. 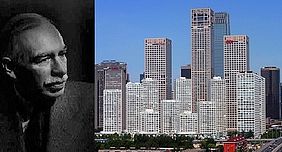 A Keynesian Look at Beijing

Manfred Nitsch and Frank Diebel have analysed the micro-foundations of the Chinese growth model within a comprehensive monetary theory of economic development, based on Schumpeter, Keynes, and the contemporary monetary Keynesians. They have identified the Confucian traditions and the Leninist party power structure as the main specific traits of the social formation in contemporary China. The regarding journal article is available on ResearchGate.

This brief contribution tries to put the Chinese economic miracle in simpler terms, without making it too complicated with the use of technical terms.

A Keynesian Look at the Chinese Miracle

What ingredients do we need for growth? Where do we have a model example for such a miracle like the Chinese rapid ascension to a world economic giant? And who explained such a model miracle in the past?

Joseph Alois Schumpeter explained to us main ingeredients for growth in a market economy when referring to the Central European Gründerzeit at the turn of the 19th to the 20th century. He identified two main ingredients: The entrepreneur (unternehmer) and the banker. To Schumpeter spontaneous, or sustainable growth alike, is originated in innovation. And while the normal business man, called wirt, is economizing on beaten tracks, the innovative entrepreneur runs his business on crowding-out such beaten tracks with innovation. He named this process creative destruction. By means of creative destruction sluggish business men are creatively and innovatively vanquished. This leaves us, then, with plenty of room for new businesses, new employment, new products, and new consumption, thus, new investments.

But what about the wirt? Is this sluggish business man so useless after all? Monetary Keynesians like Manfred Nitsch from Freie University Berlin say no, not at all. To Nitsch, the wirt just has a different purpose. In the Monetary Keynesian Model the wirt is the wealth owner, the investor. Consequently, the wirt, indeed, plays a key role in the game of economic growth. It is even like this, that there is a floating hierarchy of players within each real-existing economy throughout the world that needs to be identified, while the wealth owning wirt usually sits at the top of any structural economic order. He decides on investment allocation without which neither banks nor entrepreneurs would have any choices to make.

Growth out of Nothing

And how exactly does growth take place now, technically at least? Well, the Monetary Keynesians explain it with Schumpeter: When a wealth owner puts his money on a commercial bank account he actually lends money to it. The commercial banker, then, is in charge of the credit cycle, stimulating investments by the allocation of bank credits to an hopefully successful and innovative entrepreneur who in turn keep his newly acquired sight deposits within the same, usually national banking system. This fact remains even true when he pays his bills. The clue here is now, the total national money supply can grow without any additional central bank money supply, because the sight deposits of new businesses simply add up to the original bank deposits of the wealth owner. Depending on the minimum reserve requirement for the commercial bank at the central bank, the commercial banker can herewith multiply the total amount of available money within the national banking system by way of a multiple creation of deposit money. Together with the number of investment possibilities, thus, growth out of nothing evolves.